Table, Moon, Ball, Bunnies and Melon uses the premise of a dualogue in which an interviewer gets caught in the activities of the interviewee in order to conduct a conversation. The predicament of a double-act is thrust upon an unsuspecting interviewer; questions are asked and the responses arrive in slightly ridiculous frivolous forms, the interview is in collision with the need to get on with the performance. The interviewer asks “What are you talking about? Where are you? What do you mean? What does it take to get answers to these questions?”

Grace gets stuck in a hole in a table; Cathy braces it so Grace can get out. Cathy eats a smashed melon as metaphor for Grace’s Proustian poetics. Power shifts back and forth between the two women; who at times pose as critic and artist, nurse and patient, expert and dilettante, performer and director.

All this takes place under the glare of the moon. The moon is admired and there are many ways of describing it.

“Despite this work’s self-referential and postmodern nature I felt it was being constructed for our benefit. In other words, not just an aesthetic wank that we’re free to watch or detach from. These two want to engage with us.

Cathy is a zaftig blonde and in some sense the foil for Grace, who is dark-haired and lightly dolorous. Grace has a Madonna quality and I don’t mean Madge but rather Jesus Christ’s mama. I can picture her in a religious painting, eyes raised heavenward. There’s something not quite on earth about her, whereas Cathy is more solid, grounded and plain bigger physically. They’re a good double-act. What they are doing is self-consciously quirky but I like how committed they are to their smartly daft-seeming actions.

This was a droll, tongue-in-cheek, knowing performance, unpretentiously pretentious and a send-up of the artifice of performance whether comic or dramatic. It exists somewhere in between but more on the side of humour. Cathy and Grace don’t take themselves too seriously but you know they believe in what they do. And that’s something we want – make that I want – from what I give my time over to…”

Table, Moon, Ball, Bunnies and Melon is such a great piece for the students to encounter because it’s so challenging on some levels but so completely accessible on others. Its clear lines, beautiful visual quality and crafted structures are wonderful. It also offers a perfect lesson in how to perform the self.

What an intriguing and refreshingly different performance, a work that slips between live art and theatre. In a subtle and provocative way, the work gives us a short history of performance art but through no means via a lecture but through a conversationally warm tone and with us, for us. Referencing Joseph Beuys and his Coyote piece as curatorial anecdote and wildly playing with Kate Bush’s Wuthering Heights, signed as a satire and as a reminder of the politics and semiotics of language between art that is task based and performance that is theatrical. Punctuated throughout these beautiful stories that reside in the politics of practice, Grace Surman reminds us to check out the moon and we do, for a long time – it’s made out of tin foil, and a whole host of other materials and, it is during these marked moments we think about our place in the world, well in fact the Universe..

Commissioned by Compass Festival, Leeds Table, Moon, Ball, Bunnies and Melon has toured to a number of venues including the Bluecoat (Liverpool), The Media Factory (Preston), Theatre in The Mill (Bradford), York St. John University Performing House (York), Chelsea Theatre and The Cockpit in London.

Thanks to Nic Green, Gary Winters 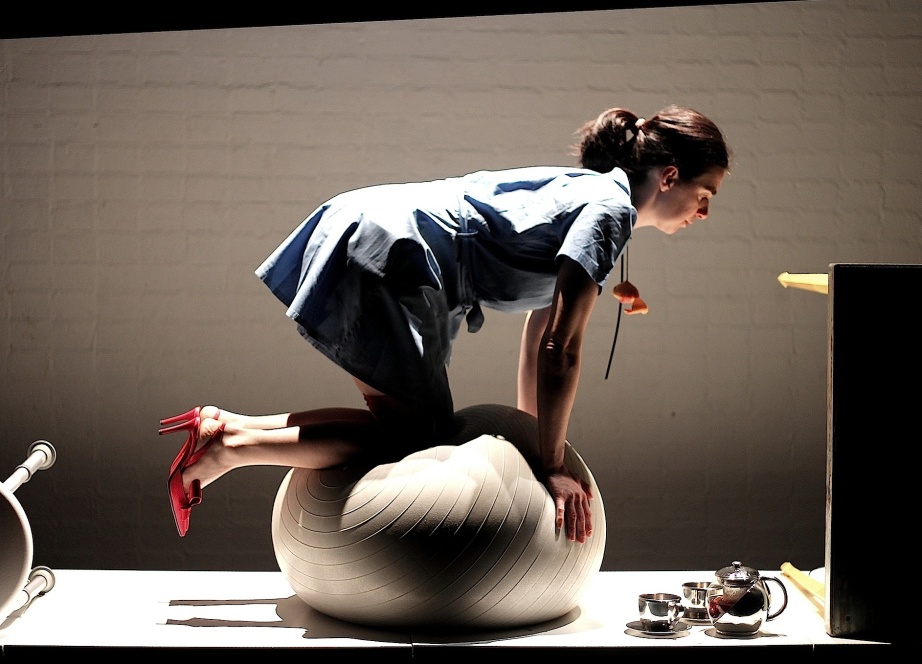